Holy Comics! is a publishing imprint for comics with religious themes. It should under no circumstances be mistaken for “Christian comics”. But of course that’s exactly what happens sometimes.

The Most Marvelous Mortal Man!TM
written by Jason A. Quest
illustrated by Ozzy Longoria
By speaking the name of God: “

” young Billy Batista is transformed into Captain Miracle! With super powers granted by the Almighty, Captain Miracle fights the forces of evil: Gaia Rites, Prof. Atheos, Sodom al-Mohammed, the Anti-Miracle, and a stranger that even He may not be able to stop! 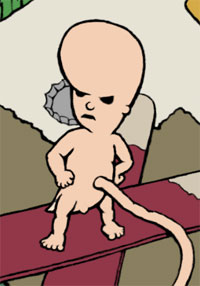 An Abortive GospelTM
written and illustrated by Jason A. Quest
Opponents of abortion often pose the rhetorical question:
What if the mother of Jesus had an abortion?
This is the story that answers the question!

The Greatest Story Ever Re-Told!TM
Not just a modern allegory, or a present-day sequel,
but a painstaking rewrite of the Bible, with an irreverent 21st-century attitude!
Cooler! Sexier! More miracles! Fewer sermons!
Witness! the birth of the Messiah in the parking lot of a motel!
Testify! in court about teenage Jesús turning bottled water into wine!
Preach! to the choir as the Christ feeds a concert audience of 5,000!
Repent! for the death of the Savior, betrayed by the kiss of a disciple!