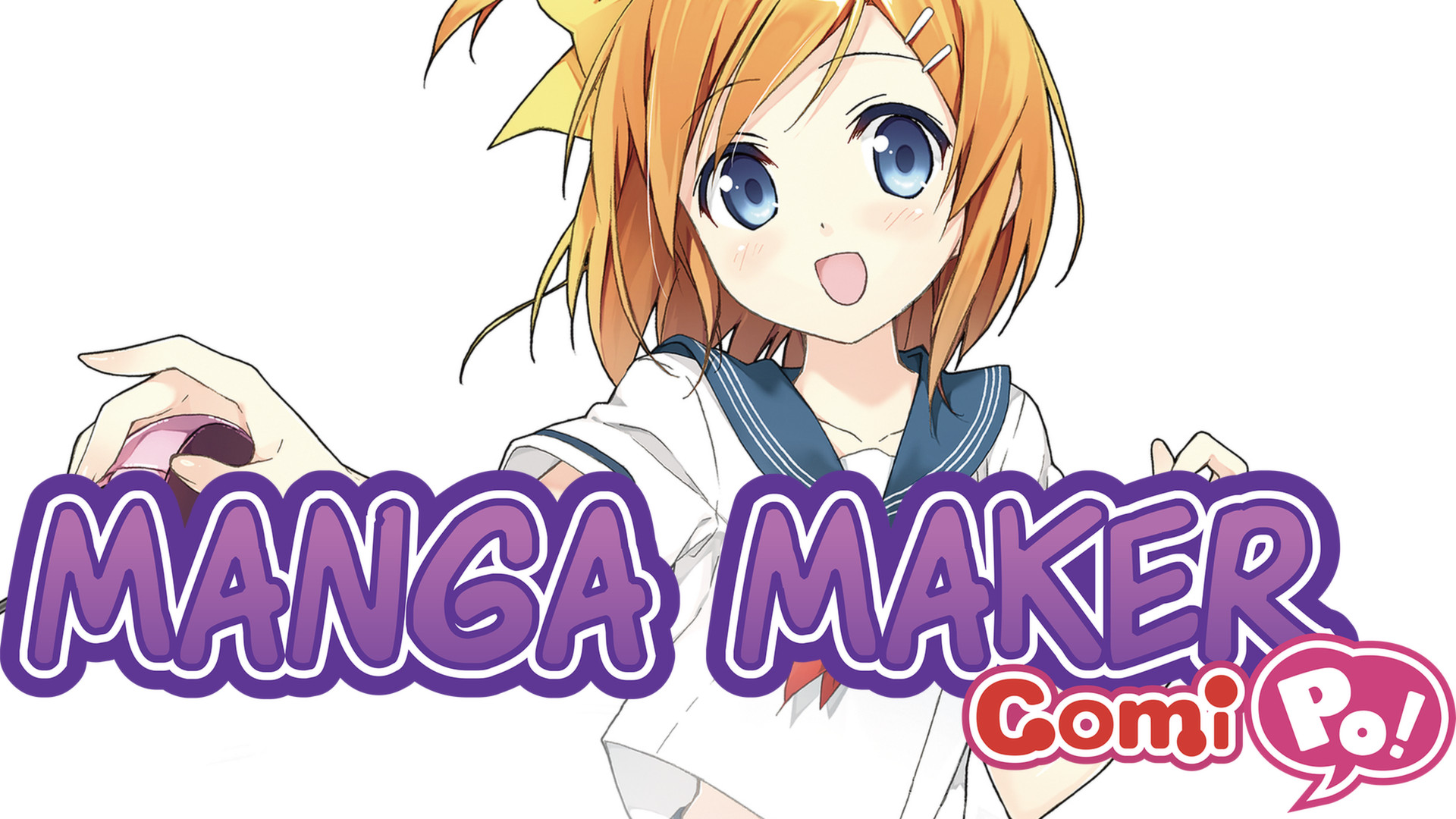 Manga Maker ComiPo! (originally just “ComiPo!”, so that’s what I call it) is a great/horrible comics-creation program for people who can’t draw (or a shortcut for those who can). It gives the user a complete toolset of panels, sound effects, word balloons and – most importantly – semi-posable 3D-model characters that you can drag and drop into complete comics pages. It’s easy to use, and in many ways it’s really cool… but it’s also frustratingly limited.

I originally bought the program several years ago when it was new, but quickly came to the conclusion that it was of no use to me, even for occasional use: it was far too limited. I set it aside for a while, but out of curiosity, I recently fired it up and upgraded it to the latest version. Updates appear to be free, indefinitely; I’d bought version 1.something, and they let me upgrade it to 3.30, including the switch to Steam as a delivery/DRM system.

The way it works is this: You pick a page layout from a set of panel arrangements. (These layouts can be adjusted as you go.) You select a background for each panel, and drop it in. You select character models (either one of the “stock” models or one you’ve customized) and drop them into the scene. You place them where you want relative to each other in 3D space, resize them, and rotate them however you want them facing.  For each character, you can select from about a hundred pre-set poses. You can’t adjust those poses, but you can tweak them in two ways: bend and turn the head, and change the hands to different gestures. You can also select from various facial expressions: angry, sad, joy, etc. with the eyes looking in different directions, and the mouth opening varying amounts. The way to do this last bit is poorly designed, but overall the system works pretty well, letting your characters “act”. Then add word balloons, sound effects, speed lines, etc. Easy peasy.

It’s obvious that the program is primarily intended for Japanese schoolkids, and anybody else who finds it useful merely got lucky. Its default characters are: a Japanese girl in a school uniform, and a Japanese boy in a school uniform, and the only included backgrounds with enough angles and variety to be useful as a story setting are a school building. The characters can be customized only a little: you can give the boy gray hair and a mustache (labeled “beard” in the software) and scale him larger if you want a teacher. It’s just barely enough to make Yet Another Manga About Japanese Schoolkids.

This limited array of “assets” is largely intentional, of course: they sell expansion packs with more stuff to choose from, mostly alternate clothing and a couple other body types. I was feeling extravagant and got the “casual wear” pack, which includes technically just four changes of clothing (two for the boys, two for the girls), with a dozen coloring options each. The color of the clothes can’t actually be customized, except in terms of picking from their selection (some of which includes patterns).

You can customize these characters with different hairstyles (for eurasian hair only), and a whole array of natural and unnatural hair and eye colors. But you can’t select a custom skin color. In the early version I looked at, this was a hard limitation with no way around it, and this was why I wrote the program off entirely, even for a one-off. Even with characters all the same “race”, skin color varies. That’s part of how you identify individuals… especially important since ComiPo doesn’t allow you to vary the shape of the face or bodies. Evidently they got enough complaints from Western customers that somewhere along the way they added the ability to change skin color on individual figures in the comic. But you can’t set it on the customized characters you create, so if you have a brown character, you need to select that skin color every time they show up. Either that, or you change an obscure setting to make >every< character the same shade of brown. (Yes, Virginia, it is possible for non-White cultures to be racist.)

It’s effectively impossible to import characters other than the models ComiPo provides/sells (which include a pre-teen boy, a pre-teen girl, and a husky businessman). Because of the proprietary design of the way they pose characters, they simply don’t exist. But the program does support plain 3D objects, which can be made using other programs and imported. If you’re industrious – or can find ones that someone else has made – you could create additional hairstyles (e.g. curly, afro). I tried to find an actual beard, but without much luck. If you wanted a heavy woman, you’d have to build the girl-model a fat suit… and you wouldn’t be able to pose her in it.

One area that the developers have paid almost no attention to is backgrounds. As far as the program is concerned, a background is a flat matte painting that you hang behind the characters. They include dozens of images for this, but… most of them are useless: individual random images in different styles by different artists. You can’t mix them, because they’d look absurd together. And except for the school settings, there are almost none that show the scene from multiple angles. Most of the images appear to have been ganked from the internet, with no effort to make them even look like they belong together in the same comic. I went and found my own… coincidentally finding one of the places that ComiPo actually did take free backgrounds from. 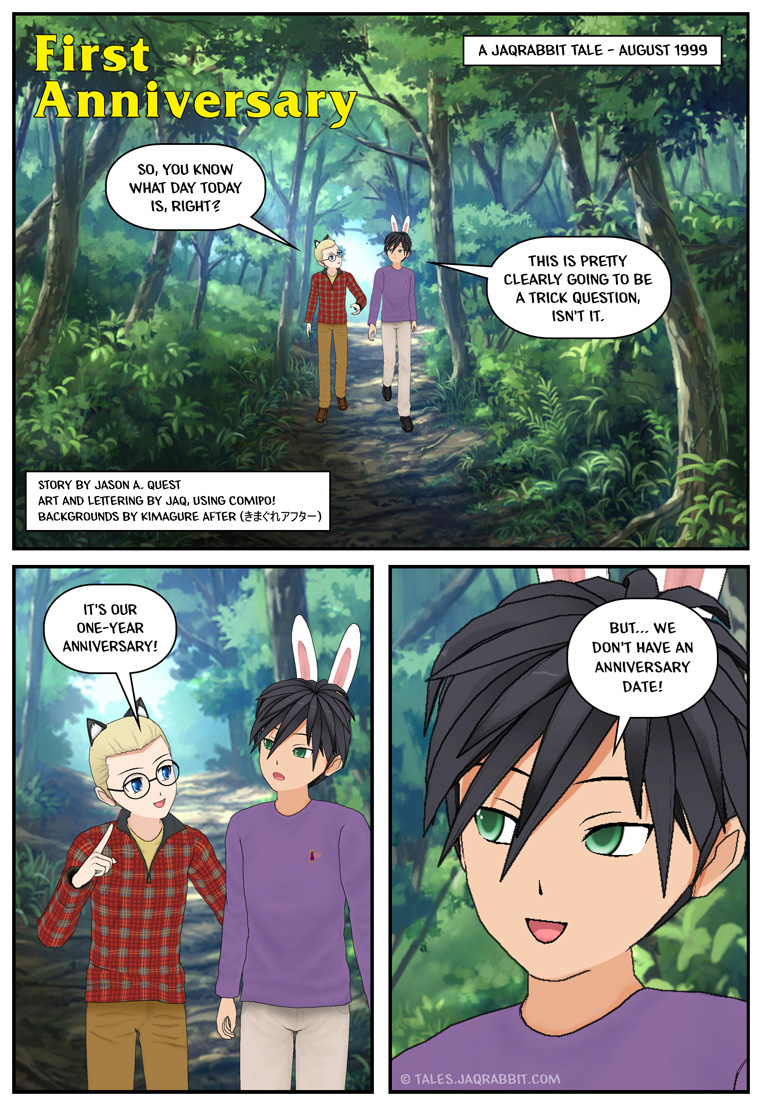 So, with all of this complaining, what’s “great” about ComiPo? For what it actually does, the functionality of the program is quite good. Ordinarily I use Clip Studio Paint for soup-to-nuts production of my comics, and for the one episode I did using ComiPo, I was able to replace every last bit of that with ComiPo, even down to adding my copyright watermarks and resizing the pages to post to the web site.

ComiPo uses any of your computer’s installed fonts, but it doesn’t let you mix typefaces in a single word balloon, so you can’t bold or italicize individual words… you’d have to paste together blocks of text for that. (CSP was like that at first… this simply isn’t a priority for Japanese developers, apparently, because Japanese script doesn’t use bold/italics.) But one thing it does better than CSP is using alternate glyphs and ligatures. With any good lettering program and an appropriately designed font, if you type a double letter, it uses two different versions of that letter, to look less mechanical. Or certain letter combinations can be replaced by a special version of them for better visual effect (Google “orthographic ligature” for a better explanation.) ComiPo does that. CSP doesn’t. Its balloon- and tail-making tools are easier to use, too.

I don’t anticipate using ComiPo much beyond this one Tale. I might try to do a Lake Michigan beach scene, using a trick I found for simulating nude models using the “swim wear” pack. I think I might have to produce my own backgrounds for that, though, because what’s available just isn’t adequate. We’ll see. Maybe for another project.

P.S. After several years managing it as both a stand-alone application, and one distributed thru Steam, the developers are dropping the stand-alone version. I understand the reasons: it was extra work, and Steam is a handy system for distributing software and – importantly – handling the digital-rights-management on it. I don’t play video games, so I’ve never used Steam before, so installing it has been a bit of a learning experience. I don’t want to dwell on it, but it dumps some cruft on your computer that runs all the time, and you might want to disable if you aren’t using the program much.