Hey, Tim: you’ve got some great parental-control features in iOS. If you’re so proud of them, why not enable them for Ello, Comixology, and other app developers? 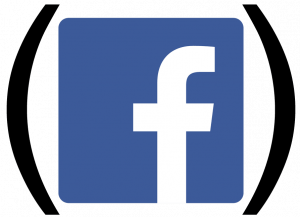 I’m not quite ready to #DeleteFacebook. But recent events have me thinking that I need to move it away from the center of my online life.

Most people these days are concerned about how Falsebook is 1) mismanaging our personal information, and 2) helping Russia/Trump/etc use it against the people of the United States. And that’s a factor for me. But I’m also thinking about how Farcebook’s censorship system – with no clear guidelines and no appeals – is actively threatening to lock me out.

The overall problem is that I – along with so much of our society – have bought in too heavily into the use of Fuckedbook. They want us to use it for everything… and we’re doing that for them.

Back in olden days there was a service called AOL, and they tried to do the same thing. And it worked for a while, because there was so little else on the internet to use. But then the World Wide Web came along, and suddenly there were unlimited alternatives. You could get e-mail from one place, find web sites with forums on different topics, buy stuff online directly from retailers, and so on. There was also porn. We saw that the walled garden of AOL was putting limits on us. But Facebox has been luring us back into their own garden. They’re AOL 2.0.

So… moving away from that. What does that involve?

To start, I’m going to get this blog of mine active. I set it up a few years ago, and I’ve occasionally posted to it, but not much. Instead I’ve been posting on FB every day. Going forward, I’m going to post more things here – on my site – and let that get echoed to FB. So the folks there will still “see” me, but every post will be an invitation to come here. And as a side benefit anybody who wants to stay off Fascistbook won’t have to go there to keep up with me. 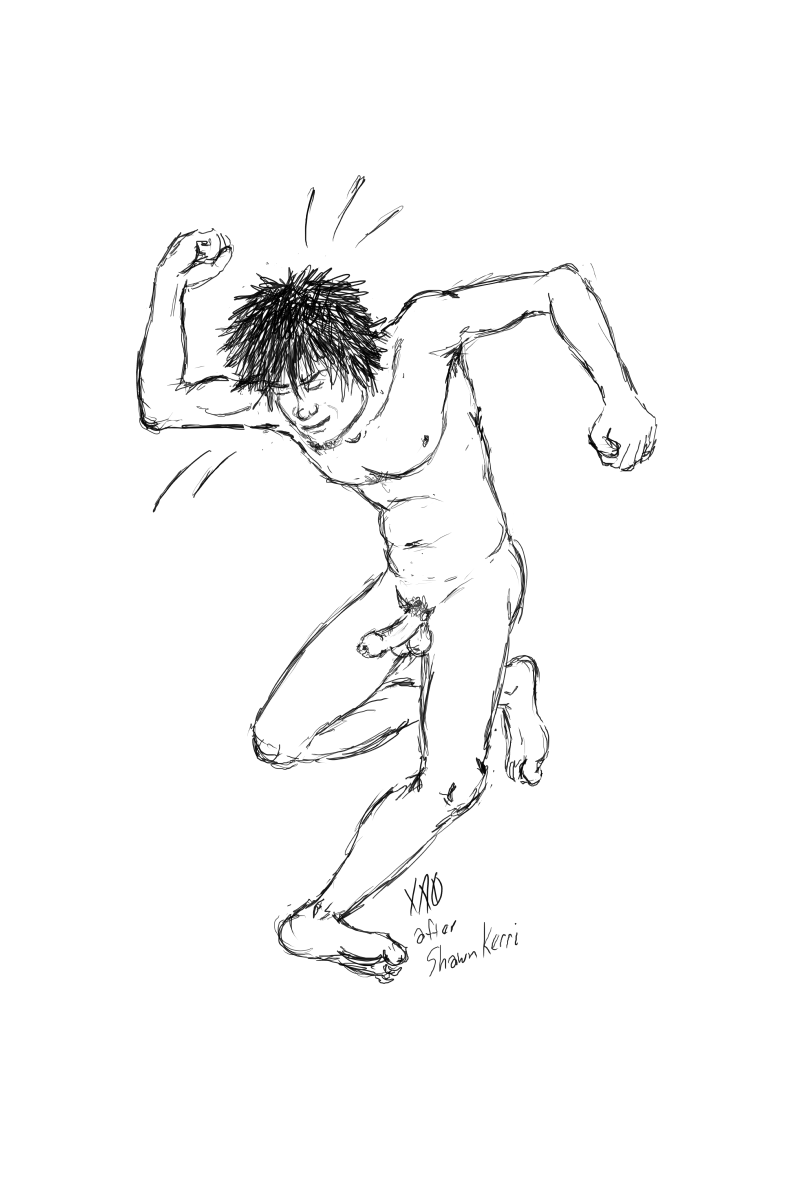 Sometimes I get really bad ideas. I mean horrible ideas. But sometimes the best thing to do for that is to just go thru with it. “Locker Mocker” is an all-ages (well, teens-and-up) adaptation of a story I did for JAQrabbit Tales, called “Bully”. It was included in You Are Not Alone volume 2, published by Grayhaven as a collection of stories about bullying. My focus, of course, was on the kind of hazing that gay and bi boys get in middle and high school. 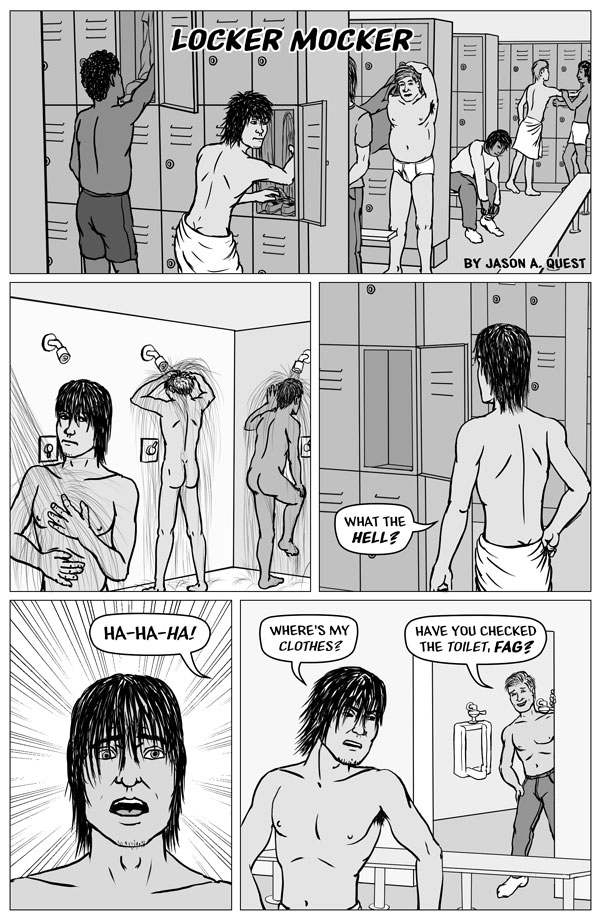 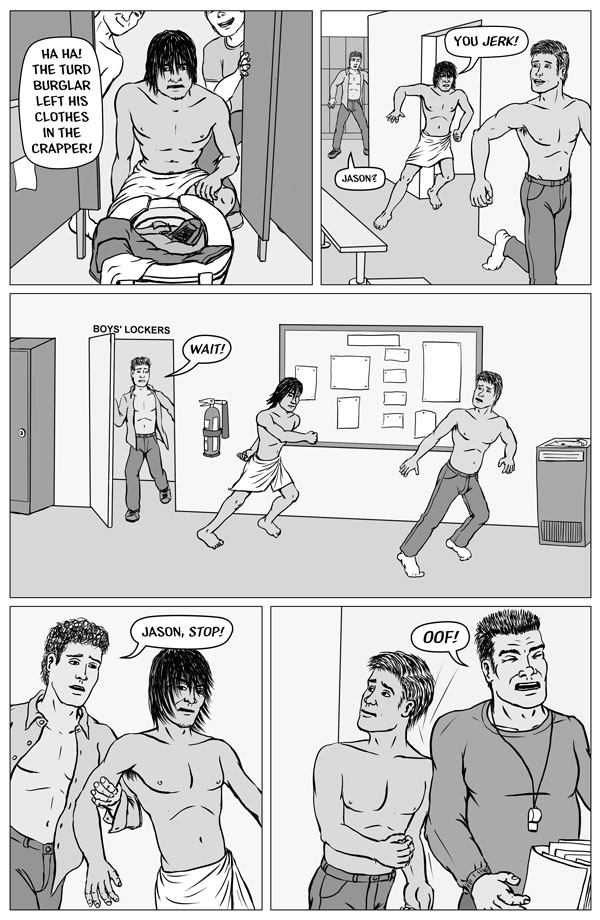 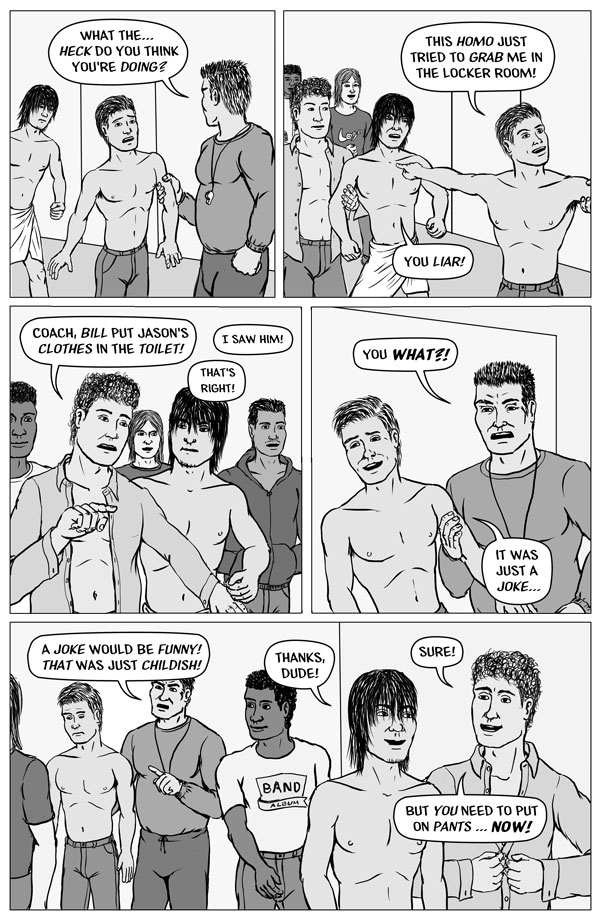 Police misconduct is a problem that’s finally getting serious attention, most commonly focusing on the treatment of African-Americans by white cops. This can take an even worse turn when the suspect is not only black but gay. “Code 288″ is police code for “public indecency”, and this story is about the different ways that’s often treated, depending on who’s being “indecent”. This story was done for APB: Artists against Police Brutality published by Rosarium Publishing. 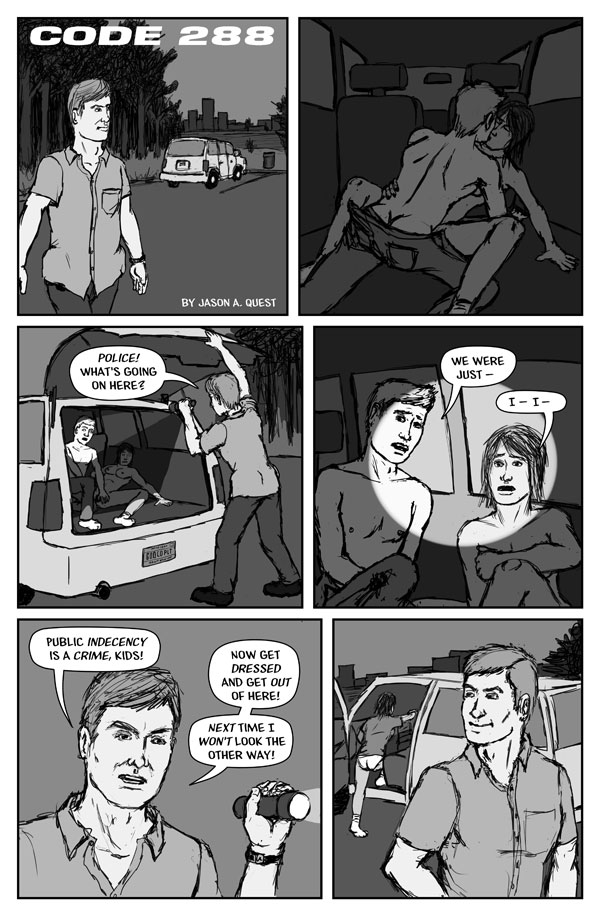 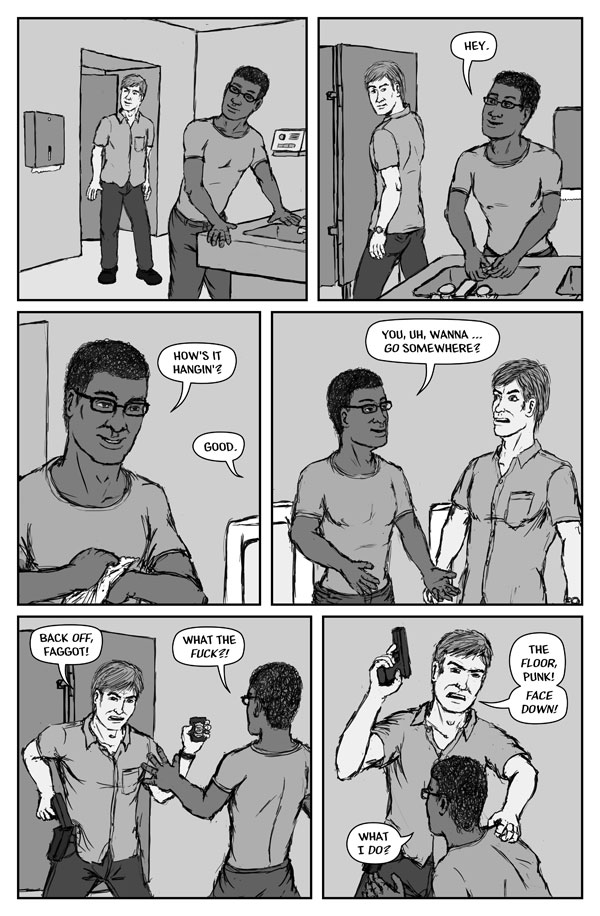 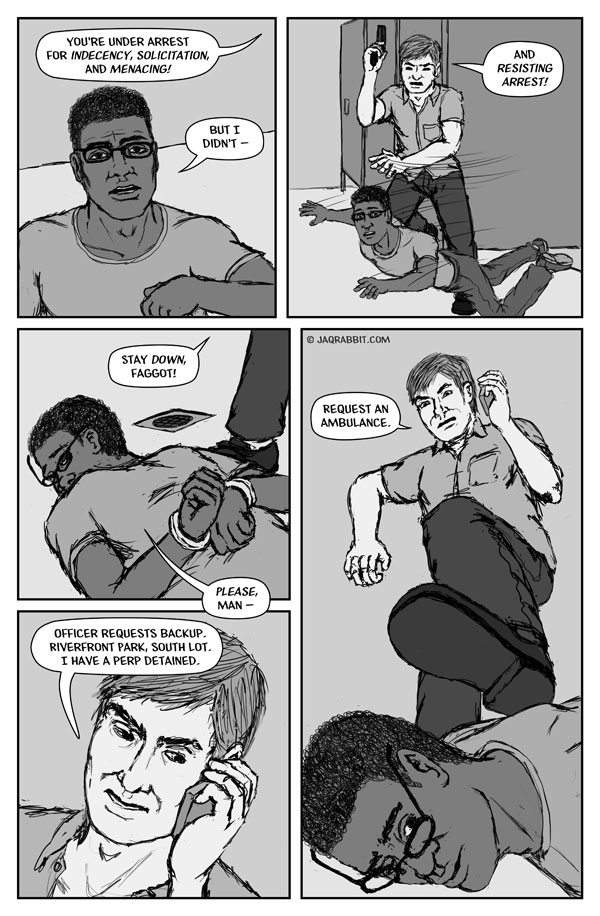 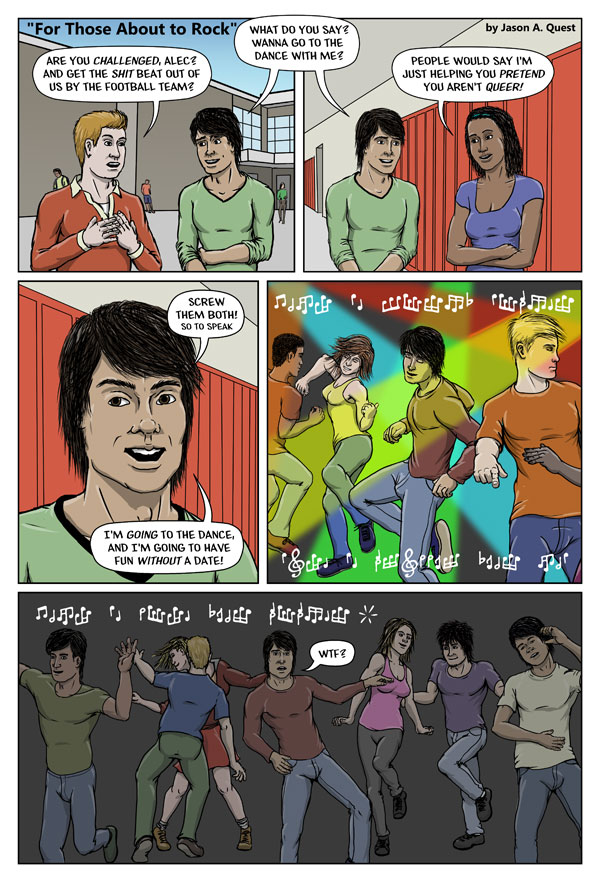 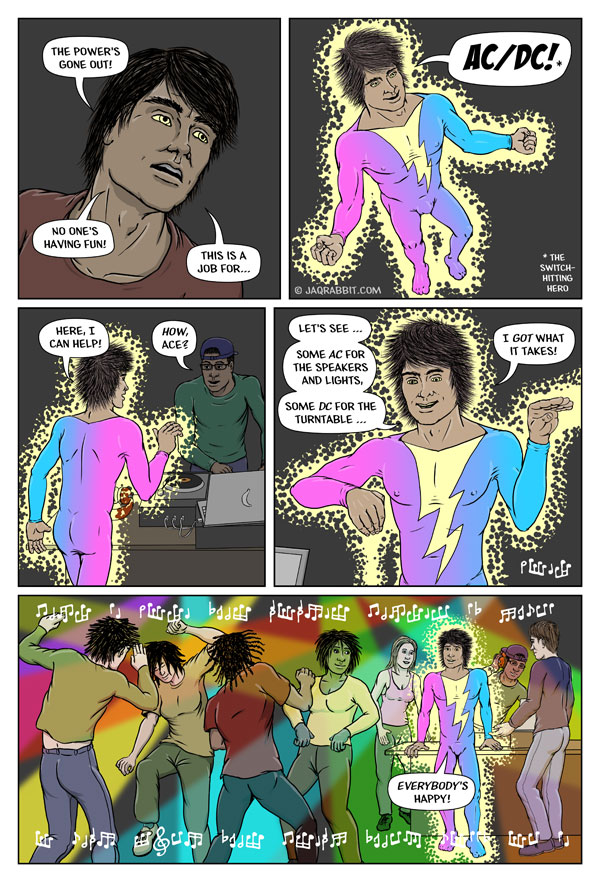 I was frustrated to read online that one of the owners of Whatever, reportedly a very good comics shop in San Francisco, was threatening a boycott of Brian K. Vaughan, over the use of the word “faggot” in the first issue of his and Cliff Chiang’s new series Paper Girls. And speaking “as a gay man who owns a comic book store” he called out Image for allowing the creators to use that word.

As a gay man who makes comics, I am troubled by this reactionary outburst.

Cougarich* seems to take his inspiration from the old Comics Code, which categorically banned certain words and subjects from comics in a misguided effort to protect children from them. “Zombie” was banned.  “Crime” couldn’t be in the title. Etc.  “There is NO place for this word especially in comics,” Cougarich declares. But this draconian standard overlooks the important matter of context: immediately after one of the characters calls someone a “faggot”, another character says that you shouldn’t do that.

Under the original terms of Code, it wasn’t permitted to depict drug use, even to condemn it. In order to tell a story showing the dangers of illicit narcotics, Marvel was forced to publish an issue without Code approval. It was actively counter-productive, and the Cougarich Code, with it’s appeal to the Word Police, would do the same thing, disallowing this “teachable moment”.

In a less heated mood, perhaps Cougarich might permit this usage, in the same spirit that the Code would permit the depiction of robberies as long as the perpetrator was properly punished. But even that rule was wrong-headed, and harmful as a universal requirement.

I’m a bit baffled that one still has to say this in 2015, but: comics aren’t all for children. As an adult, I don’t need a publisher to teach me these life lessons, nor do I need a retailer to protect me from stories that don’t meet his standards of moral obviousness. I recently made a short comic about police brutality, which includes an officer calling characters both “cocksucker” and “faggot”. No one corrects him. He doesn’t get punished for it. Because it’s not that kind of comic. It’s a comic about harsh facts of real life, and it’s intended for readers who are prepared to read about that and to reach their own conclusions about it.

If I was writing for children, I’d avoid those words, because children may not fully understand that context. And if I was writing something for adults that was intended to inoffensive, I’d do the same. But when I’m writing a story for adults about serious matters, I’m going to dialog it with the vocabulary that serious adults use. If someone doesn’t like that, then they are not my audience, and they are invited not to read it… whether they are a puritan from my hometown in the Midwest, or a gay couple from San Francisco.

I am a fierce defender of free speech, but I’m not saying that anyone can write what they want with no consequences. If a retailer feels that someone’s work is offensive, they have a right to say so, and even not to sell it. But I would hope they would apply a more insightful standard than this. And I also have the right to speak up and say when I disagree, and in this case I do emphatically.

And I do this because I am a gay man, one who labors under burdensome rules saying that I can’t post (this), and I can’t sell comics containing (that). I would very much like to sell my comics in stores, but because of the explicitly homosexual content, the number who would carry them is very small. And it’s sadly ironic that, because I use the word “faggot” in dialog – because people do – a store owned by a gay couple would be on the side of those who would not.

* Since the statement was posted under an account shared by the owners I don’t know which of the two was the author, so I’ll refer to them by the name used on the account. 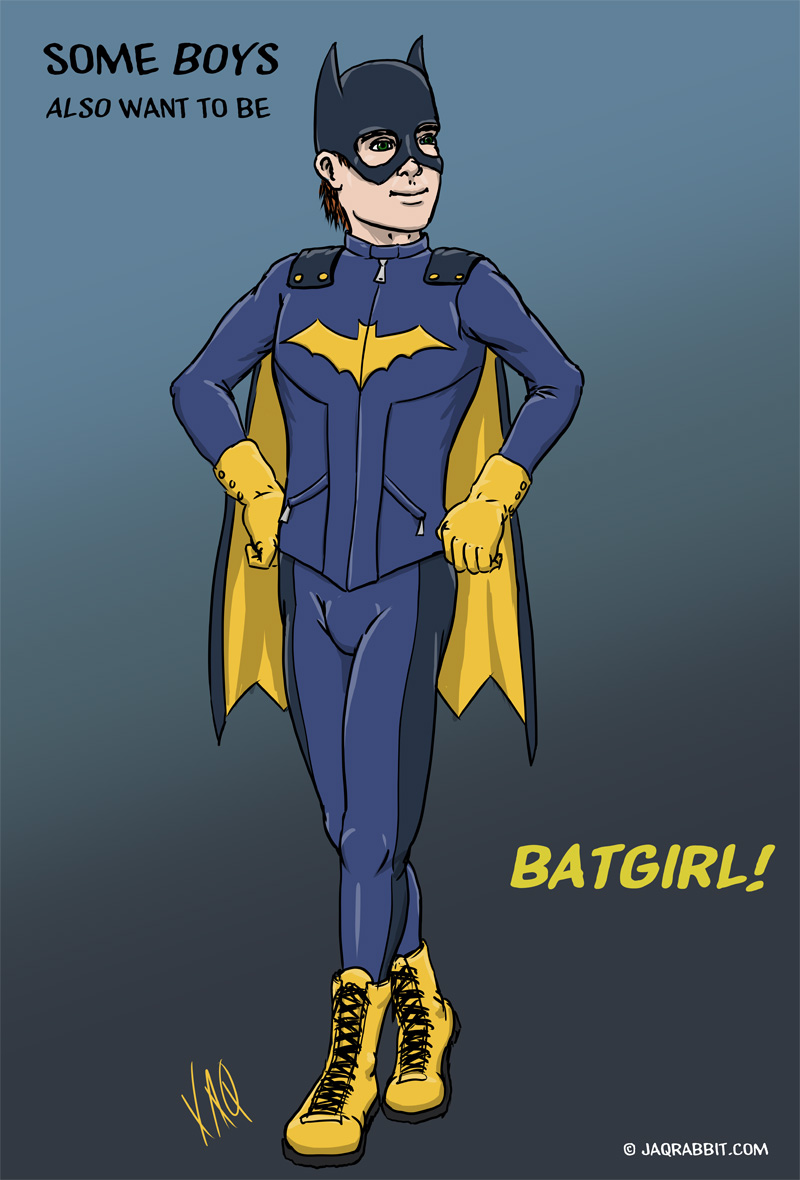