This is a story called “The Tramp”, written by me and illustrated by Bevis Musson. It was made for an anthology that didn’t quite happen, called Work!, which was to be a collection of comics based on songs about labor and working people.

This story is based on “The Tramp” a song written by 1910s Swedish-American labor activist Joe Hill. His “tramp” was a hobo, but we reinterpreted the tale using the more modern sense of the word. The original lyrics follow the comic, along with some commentary about the song and the adaptation process. 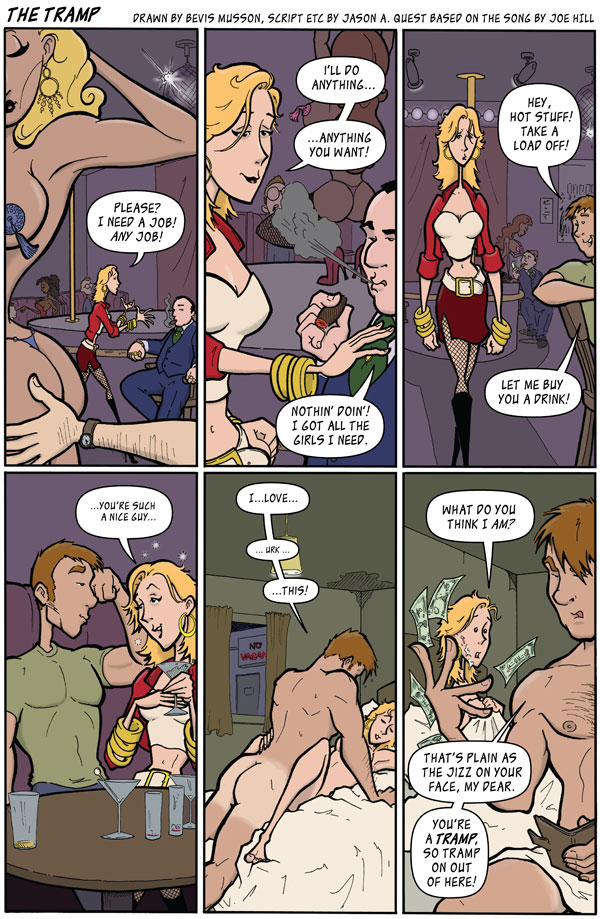 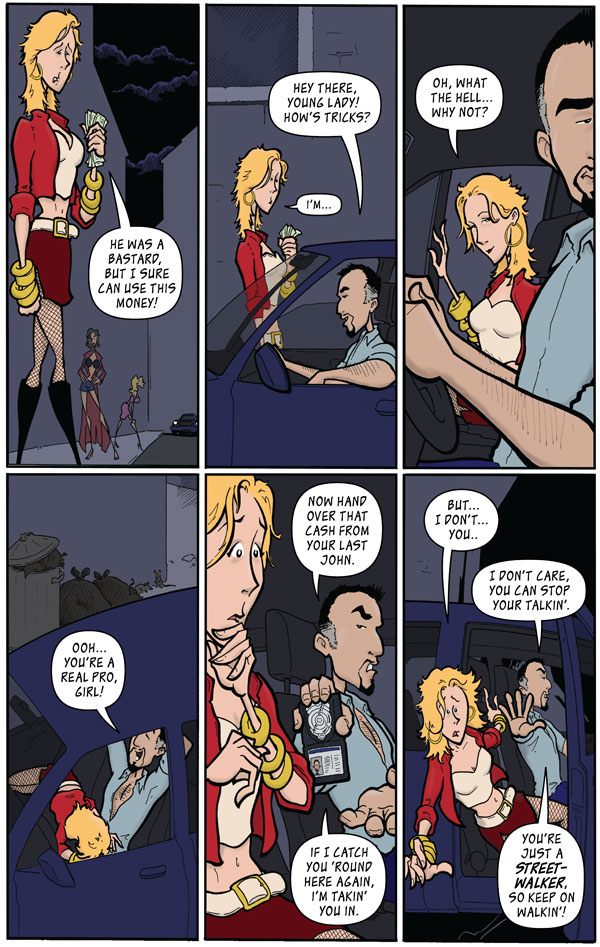 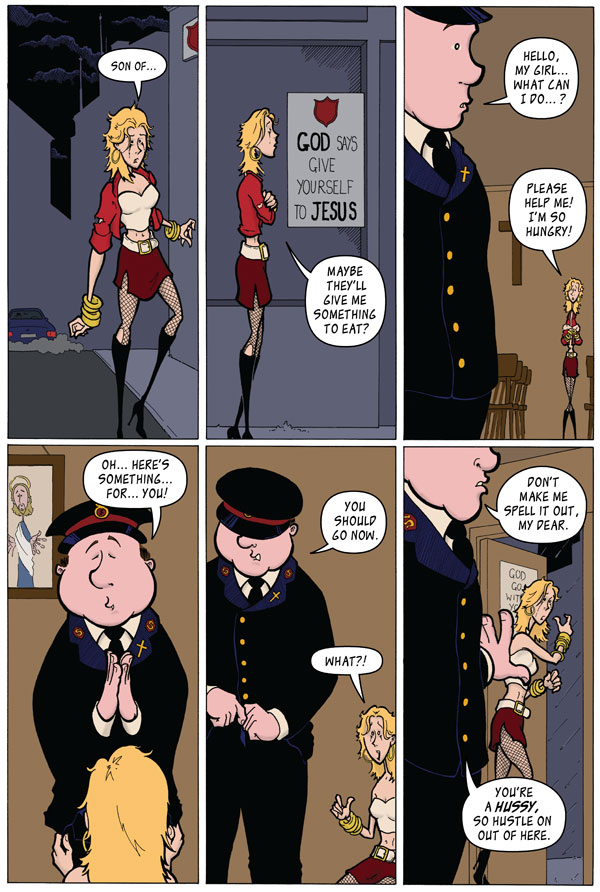 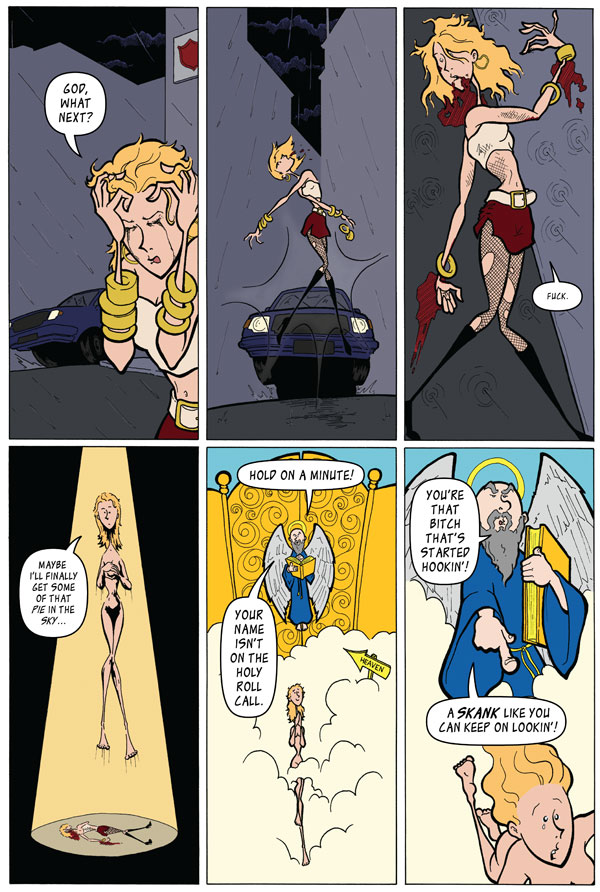 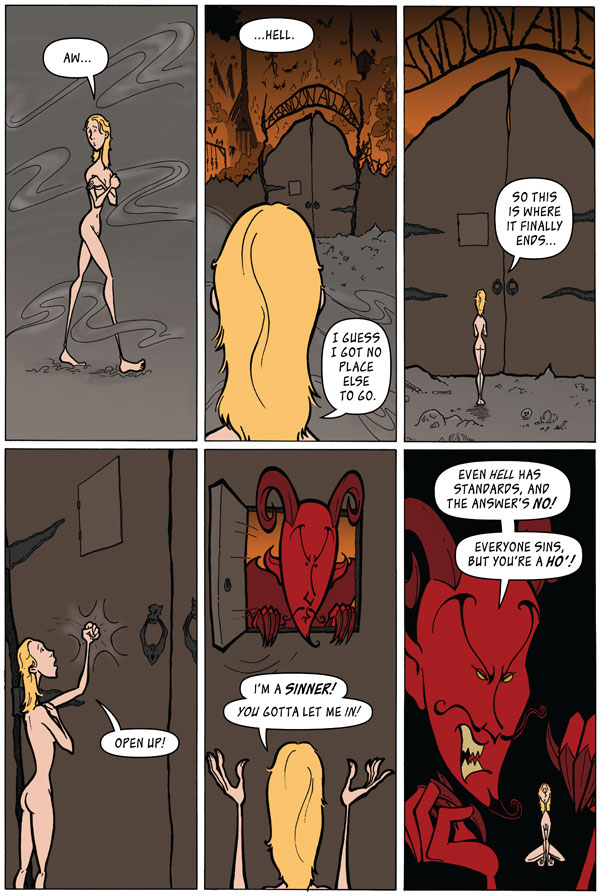 Hill’s original lyrics are a sort of parody of “Tramp, Tramp, Tramp, the Boys are Marching”, a Civil War marching song. It’s sung to the same tune, which is much better known today as the melody for “Jesus Loves the Little Children”. So sing along:

If you all will shut your trap,
I will tell you ’bout a chap,
That was broke and up against it, too, for fair;
He was not the kind to shirk,
He was looking hard for work,
But he heard the same old story everywhere.

(chorus):
Tramp, tramp, tramp, keep on a-tramping,
Nothing doing here for you;
If I catch you ’round again,
You will wear the ball and chain,
Keep on tramping, that’s the best thing you can do.

He walked up and down the street,
‘Til the shoes fell off his feet.
In a house he spied a lady cooking stew,
And he said, “How do you do,
May I chop some wood for you?”
What the lady told him made him feel so blue.

‘Cross the street a sign he read,
“Work for Jesus” so it said,
And he said, “Here is my chance, I’ll surely try,”
And he kneeled upon the floor,
Till his knees got rather sore,
But at eating-time he heard the preacher cry–

Down the street he met a cop,
And the copper made him stop,
And he asked him, “When did you blow into town?
Come with me up to the judge,”
But the judge he said, “Oh fudge,
Bums that have no money needn’t come around.”

Finally came that happy day
When his life did pass away,
He was sure he’d go to heaven when he died,
When he reached the pearly gate,
Santa Peter, mean old skate,
Slammed the gate right in his face and loudly cried:

In adapting this, I wanted to maintain the feel and structure of it as a song. Skipping the first verse that sets the stage, I adapted each verse into a one-page episode. The verses are each 6 lines, so I wrote 6 panels per page. Bevis took that a step further, reflecting the pair of triplets in each verse by drawing it in 2 rows of 3 panels each, a challenging format which he pulled off beautifully.

I took a few liberties with the story itself, reflecting that this was a different kind of tramp: equally willing to do any job, but with different opportunities to try for. I swapped the order of verses 3 and 4 (the preacher and the cop) for two reasons: 1) that sequence of events flowed more naturally in my story, and 2) it allowed for the more dramatic re-appearance of the blue car in the adaptation of verse 5 (the tramp’s death).

For the dialog, I borrowed from Hill’s lyrics (e.g. “nothing doing” “if I catch you round again”). I couldn’t match his AABCCB rhyme pattern, but for the closing line of each page I wrote a rhyming couplet, in the form of “you’re a tramp so keep on tramping” – but with different slurs. By a coincidence of slang, I was able to update Hill’s closing line “you’re a ‘bo” (short for “hobo”) to “you’re a ho'” (short for whore).

Hill’s lyrics didn’t specify what kind of preacher his Tramp turned to, but the Salvation Army was the clear choice. Hill and his fellow Wobblies (Industrial Workers of the World) held the “Starvation Army” in contempt. Hill’s song “The Preacher and the Slave” (a parody of their hymn “In the Sweet By-and-By”) coined the phrase “pie in the sky”, referring to the Salvationists’ empty promises of eventual comfort in Heaven. I also gave our Tramp a line referring to that.

Joe Hill’s own death is an interesting story. He was charged with shooting a former police officer and his son (who’d apparently shot back), justified by a gunshot wound which Hill said he’d received from a jealous rival for a woman’s affections. He was convicted based mostly on his association with the Wobblies and unconvincing witness identifications. No less than Woodrow Wilson and Helen Keller argued for clemency, but the Utah Supreme Court upheld his death sentence. At his execution, as the presiding deputy said, “Ready… aim…” Hill interrupted: “Fire — go on and fire!”

He left a written statement which said, in part, “Don’t waste any time in mourning. Organize…” This piece is dedicated to his legacy.

Great! I wish the anthology had made it! I despise the “salvation armada” and their cruel rules that only feed believers. Not enough people even know who the Wobblies were!